Writer Barbara Boudreau has written a good deal about her life and her family over the years. She’s successfully used the tools of creative writing to bring her stories to life—and add humor to them. When I learned she would be researching her Lithuanian roots, I was captivated.

When I was in grade school in the 1950s, some of my classmates were of Lithuanian descent, so I knew about the country. Then, over the decades I didn’t hear anything at all about the country. Where had it gone? was a question that frequently poked at my mind. So I eagerly awaited the publication of her book, Circling Lithuania. When it became available, I snapped up two copies, one of which I sent to my husband’s aunt, who loved it and passed it on to her sisters.)

I recommend that you do the same. You won’t be disappointed. (And the photos are really great.)

My interest in my family’s history resulted in a need to write about it. With Lynette’s help and feedback from the other writers in her classes, I produced memoirs and genealogical essays and published a family history about four generations of my father’s mother’s Irish family, Descendents of John Cornelius Nestor and Bridget Earls of Kilshanny.

I’m not sure why my mother didn’t want me to know her parents came from Lithuania. However, it’s not uncommon for many first generation Americans to leave their parents’ heritage behind. In addition to vital records and immigration entry lists, I was fortunate to track down a family rumor and, through that, locate a hospital record for my grandmother, which contained an extensive interview with her younger sister. Here was a wealth of information about the family’s circumstances in Lithuania and about my grandparents’ married life.

As I started writing about my maternal grandmother’s family it became clear that I needed to visit Lithuania. To see the sites that interested us, my daughter and I decided to go there for two weeks in the summer and rent a car when we got there. 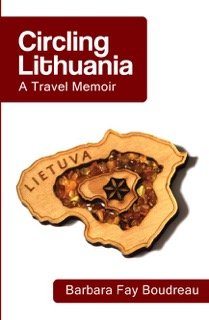 Lithuania was once the largest country in Europe, extending from the Baltic to the Black Sea, and encompassed most of today’s Belarus and Ukraine. In spite of two long periods of Russian rule, Lithuania has maintained its own culture. It is relatively flat and largely agricultural. A substantial percentage of the world’s research lasers are manufactured there. In advance of traveling to the country, I learned to say, “Excuse me, do you understand English?” in passable Lithuanian, and on our trip, it was easy to find people who did.

Lithuanian food is based on potatoes and pork, accompanied by sour cream. The latkes, kielbasa, and dumplings were delicious. During a heat wave we found refreshing salads too. We even enjoyed a Japanese dinner that rivaled those we had in Japan.

During the two weeks we only encountered one traffic jam, on a Friday night, heading into a seaside area. In museums at most there might be one party ahead of us at the ticket counter. The museums included art, history, amber, chocolate, devils, and cats, of all things. We were particularly taken with the plentiful outdoor sculptures. Although some were of historical figures, many were from folk tales or the artist’s imagination and had great charm. The 200,000 donated crosses and artifacts at The Hill of Crosses shouldn’t be missed.

We began and ended in the capitol, Vilnius, where the oldest part of the city has been designated a UNESCO World Heritage site. We visited gorgeous Catholic churches, an ornate Russian Orthodox church, and saw the only remaining synagogue. The village church and the old part of the cemetery in Virbalis, where most of my ancestors originated, had been bombed during the Second World War. Records in the national archives are in Latin, Lithuanian, and Russian, thus the prospect of doing Lithuanian family research while there wasn’t promising. So I decided that hiring a local researcher later would be preferable to spending our vacation time in the archives.

On arriving home, my first idea was to write about the trip in an appendix to another upcoming family history. But the illustrated appendix alone would overpower the book. Therefore, Circling Lithuania: A Travel Memoir became the little book that grew. I hope that both people of Lithuanian heritage and others will enjoy learning more about the country and its culture.

Visit @BoudreauFay on Twitter to see notices of upcoming readings and talks. You can purchase Circling Lithuania here.